Isaac Sullivan Flys The Flag For The Bay 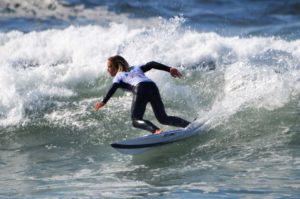 Last Saturday the 2nd of February 2019, the Burton Toyota Surfest Wildcards were held at Birubi Beach. What started out as testing 4-6 foot messy conditions soon progressed. As the wind and swell eased the contestants were left with some great contestable waves.

Unfortunately our champion female surfer Jasmine Sampson and our grommets champion Jimmi Hill were unable to attend the event due to medical reason.

Isaac only found out the night before the competition that he was getting into the event as a reserve. He did not want to waste his opportunity our current Under 16’s champion was on fire! He blasted through his heats to reach the final with some hot competition from all around NSW.

Isaac used his local knowledge and started out the final with sick mornawattu left and smashed it all the way to the beach. It ended up being the highest scoring wave of the final. He soon backed it up with a bigger right and drove off the bottom to smash the lip and send out a shit load of spray! Unfortunately the wave shut down and he was not able to get another opportunity for another manoeuvre.

The rest of the competitors made a late charge for Isaac with Caves Beach surfer Jordan Lickerman getting some great waves. But with a few minutes left Isaac had one more chance with another mornawattu left and drove off the bottom hard to smack the lip but unfortunately caught an inside rail which threw him off balance.

Nonetheless Isaac put together a great event. He flew the flag for the Bay and walked away with our best result at the event, 2nd place! Well done Isaac, it was awesome to watch and you will get them next time.

Our other Bay members did not have as good a time with young Taj Turner surfing well but was unfortunate to get through while our older boys got stuck in the tricky conditions and unfortunately were knocked out in the first round. Although Josh Stretton was surfing amazing his wave choice let him down with only finding waves were he could only lay down one big manoeuvre in the Juniors. 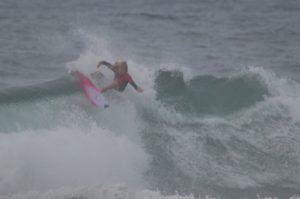 Although they are no longer part of the Bay Area Boardriders but still from the Bay, brother /sister pair of Mikey and Ellie Clayton Brown used their local knowledge to blitz the field. 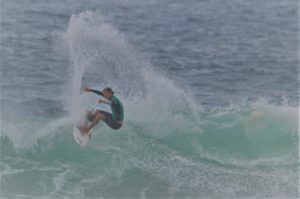 Mikey taking out the Under 18’s and Ellie at only 17 taking out the big one, the Open Ladies Title. She will get the Wildcard into the main event of the Burton Automotive Pro. Yeeww we wish you the best of luck Ellie!