On the 15th of December 2018 the Bay Area Boardriders concluded the year with their annual fun single fin teams event with the presentation following that night at Birubi Beach Surf Club. 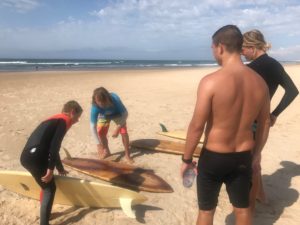 Surfers are selected at random creating a two-man team. They start the heat on the beach lined up behind a start line and have to run and select the single fin they want to use. With most surfers wanting the same board, the start can get very interesting.

There were a number of standouts during the day with Max McGaw, Josh Stretton and the legendary Mister Single Fin himself, Jamie Dooran leading the way. The day wasn’t without controversy though with Max McGaw’s team mate and dad Craig going down at end of their Semi Final with a knee injury. That left an opening for an injury replacement to step in. It just happened that Mark Buchanan was at the event watching but not competing that Craig consulted with him and was decided that he had to step in to fill the void. Some say it was all planned but who really knows…

With the final decided with 4 teams consisting of Josh Stretton / Jake Button, Jamie Dooran /Jimmi Hill,  Nelson Corner / Kai Buchanan and Max McGaw / Craig McGaw / Mark Buchanan took to the water with Max McGaw and Josh Stretton wasting no time setting the bar for their respective teams. The winner was announced at the Presentation Night. 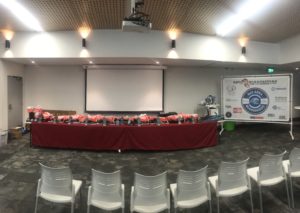 Our Annual Presentation Night was held at Birubi Beach Surf Club. The 2018 Retro themed night is a celebration of the year where we all find out who had performed the best throughout the year and who picked up the special awards of The Rising Star, Most Improved, Life Members and the 30 years of service awards. The night is MC’d by our 2018 President Rod Astley and Vice President John Sullivan. 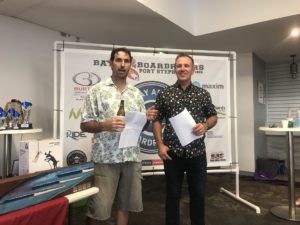 The night began with our resident BBQ cook Gary Moule cooking up a storm while the adults indulged in some nice cold Ales and the grommets ran and skated around. Then the formal part of the night started where we thanked all our sponsors for their support, without them the club would not be possible.

Life Members were the first to be awarded. This year 2 members were getting long time member Jamie Dooran joining his dad as a Bay Area Boardriders LIFE member. And also joining Jamie was the hard working Craig McGaw who has been working hard running our club contests and keeping the yearly scores for years now.

Added this year was the 30 years of service club that was created and sponsored by another life member and nearly a 30 years of service member to, Dean Shaw. The club would like to thank Dean for all he has done for the club and creating and acknowledging members who have been part of the club for 30 years.

The 30 years of service awards went to  two former club champions and both former presidents of the club in Rod Astley and Shane Buchanan. The other member to make it to 30 years is our resident BBQ cook Gary Moule.

The the clubs age division winners were read out:

Special mention to Jasmine Sampson who competed against the boys and with only competing in 4 events she still came in at a respected 5th spot.

And the final and most important award of the night haha, the Wedge Award. The Wedge Award goes to the member that has done the stupidest thing for the year. Although there were a number of contestants and some pretty stupid things done, it was our 2017 Club President that took the award.

And back to the Single Fin teams event

All in all it was a great day, a great night and an all round great year for the club.

We hope to see you all next year along with new members. See you all in 2019.